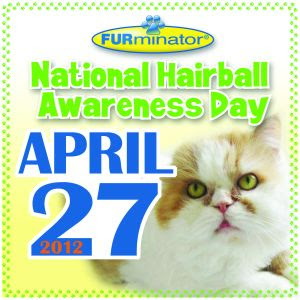 Today is National Hairball Awareness Day.  As Jan says, if you live with a cat, you're aware of hairballs.  (Cat hairball problems are just naturally common in cats, all cats, because of their self-grooming habits. Their rough tongues are made to clean themselves thoroughly and , in doing so, they ingest a lot of hair.)

Jan complains, if you live with a number of cats, you wish someone would invent a self-operating hairball sucker machine so you don't have to use a toothbrush to clean the air conditioning unit in the window, or step into a wet slipper in the middle of the night, or -.  As Buddy, Merci & Sam explain, if you live with cats, don't eat those icky things!  Let your human clean up the mess. (Hairballs generally consist of compacted fur, but they often also include food and a coating of mucus.)

We received a FURminator and Jan used it to brush the cats and create a Fur-lebrity.  (The most important and most effective way to prevent hairball formation is frequent grooming to remove the dead undercoat before it is swallowed.)

You might remember that we fired Jan because she isn't very creative and this was the best could come up with for the contest. 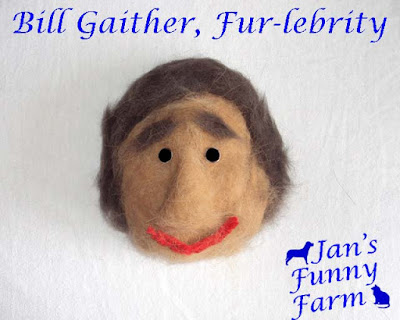 We had a complaint from Bill Gaither's Homecoming Radio that we set Bill's popularity back 40 years.  Well, maybe not 40 years, but at least 40 minutes worth.  No one recognized him.

UPDATE: Um, before readers start stoning Bill or the Homecoming crew, the above is a joke.  No one - neither Bill nor anyone from HR - has complained.  In fact, Tori Taff, one of the co-hosts laughed so hard when she saw it, she asked permission and then posted it on Homecoming Radio's Facebook page.earlier this month.  Thankfully, they all have a good sense of humor, one of the reasons we picked Bill as our Fur-lebrity.  We'd seen Jan's previous artwork.  :) 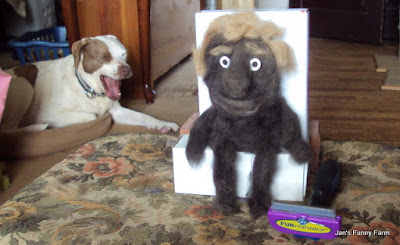 Sam is still laughing at Jan's first attempt.  Cameron was our biggest fur contributor this year and he couldn't help it that he's a black tuxie dude.

The winner of the contest will be announced today, so be sure to check out FURminator's Facebook page. Even if you aren't on FB, you can still use the link to view their wall.

Thanks to Romeo the Cat and Furminator for allowing us to participate in the contest.  It's been fun.