It was really nerve-wracking, waiting to hear what yesterday would bring, as it was the final day before Rainsville was scheduled to step in and confiscate the remainder of Carrol Crocker's dogs. We haven't been able to get confirmation yet, but the Green Acres web page changed the number to 7 yesterday and there's no sign of panic. So we assume the request made to the court for a few more days was granted and the remaining dogs are still safe today.

We're hopping around with our paws crossed, waiting for really good news -- that all of Carrol's dogs are safely re-homed, in a rescue, or being fostered.

And for a quick update on our -- uh, Jan's computer, she is hoping she might be able to work with photos again in a small way, but she had to uninstall her MS photo editor because the program is determined there are 2 sets of photos on here (with the same file name and path, no less) and it locks up everything looking for them. If anyone has a clue how she can get it to reinstall (again!) without causing the same problem, let us know. Nothing complicated. We don't want to see her sitting here again, tears running, fists waving and yelling at a machine.

We haven't had much attention for a while because she has been spending days at this computer -- till the wee hours of the morning -- trying to figure out how this new av/anti-spyware/"Windows-Prozac" program works and why it was being so contrary every time she tried to do something as simple as retrieve her email.

Even though she thinks she's made progress and is ready to give photos a try today, it's going to be a long, long, super-long highway back to where we were in November. And we were behind then. So, we apologize to all who have given us awards in the last 5 or so months. We promised we would post them, but we're going to have to go back on our word. We hope you will forgive us, but except for eventually getting to a couple of special posts we've had planned for a while, we're going to have to move forward. Our thanks to each of you who shared your award with us. It was an honor.

And, as much as we hate to say it, this computer is not finished. Mr. Doug will be doing more work on it in the near future. We hope that will just be for hardware. He has invested a lot of hours already. In fact, the night Jan worked till almost 4 a.m. writing a column, her brother spent the same hours working on her computer. They're both a little old for all-nighters and this has really taken a toll on both of them. Jan is just getting back on her feet from it and hopefully Mr. Doug is too. We're really proud of Mr. Doug!

Buddy: I've always been proud of him! Mr. Doug saved my life.

Well, just in case you've forgotten what we look like, we're going to go into our online Picasa album and see what we can find. Ah, here's one from Karl's lizard BBQ back on April 15 of last year. That was a fun time! 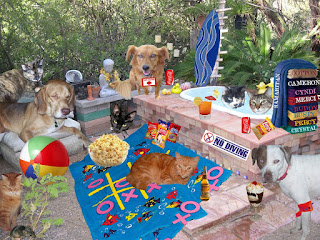