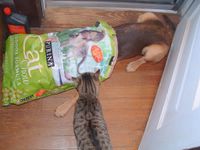 “Buddy, what are you doing behind the couch? Why aren’t you running around the house annoying everyone?”

Buddy lifts his head slightly, enough to see Percy peering at him under the couch. “I don’t feel well. I’m in pain.”

“What’s wrong?” Crystal asks, as he joins Percy crawling under the couch to reach Buddy. “Do you have a virus?”

Cameron joins them. “Farmed? You mean you’re tired from planting a vegetable garden?” Cameron is incredulous that anyone would want to plant vegetables. Now, a canned chicken garden with dried kibble might be appropriate.

“No,” Buddy declares weakly. “My kidneys have been farmed.”

“Oh, he means harvested,” Percy says, remembering the detective show they all watched last night. “Remember, the guy was knocked out and woke up in a bathtub filled with blood and ice. His kidneys had been harvested and sold.” He looks nervously at the others. “He died when the ice melted.”

“Yes, that’s for sure,” Cameron says “That’s because we’ll all starve to death while Buddy steals our food.”

“Why don’t you start from the beginning,” Crystal suggests. “What happened to make you think your kidneys have been farmed - I mean, harvested.”

“Well, Jan took me back to the nice guys who fed me biscuits while one of them poked holes in me when he thought I wasn’t looking. Still, I was excited to see them again. Jan forgot to feed me before we left the house and I thought they would give me some more biscuits. Instead, one took me outside and locked me in a cage. I tried to warn Jan to run before they put her in a cage too, but I guess she couldn’t hear me baying for her. They must have knocked her out first or she would have rescued me.”

The three cats nod their heads as they listen attentively. This story is sounding more and more familiar, all but the part where Buddy is locked in an outdoor cage.

“Before long, they knocked me out. When I woke up, my kidneys were missing. I guess Jan paid a ransom or something because eventually they brought me back to see her and we escaped. I was never so glad to see Jan in all of my life.”

“Buddy,” Crystal says, “your story is similar to ours. Cameron, Percy and I have each had a similar experience. But what makes you think your kidneys are missing?”

Buddy lifts one leg and lets it drop limply. “See, they’re missing. My kidneys are gone.”

Crystal, the oldest cat, laughs. “Buddy, you need to read an anatomy book. That isn’t where your kidneys are located.” He looks around. “You’ve had a minor operation. Percy. You’ll be sore for a few days, but you’ll survive.”

“Well, if they didn’t farm my kidneys, what did they steal?”

Cotton is listening from her resting spot on the back of the couch. This is too good an opportunity to miss adding her two cents worth to the male conversation. “Oh, Buddy, they didn’t take anything important,” she teases. “Only your brain. But you didn’t need it. It was just a spare.”

“Ignore her,” Percy tells Buddy, cocking his head to listen intently to the rustling noises coming from the kitchen. “I think I know where to locate some pain medication to cheer you up and get you back on your feet again.” He dashes off to the kitchen.

“Here you go, Buddy,” Percy calls, his speech garbled as if he has a mouthful of something. The rustling noises draw nearer, then an eighteen pound cat food bag appears at the end of the couch. Percy lets go of the corner he has been holding in his mouth. “I thought I heard Jan filling the cat food container. And sure enough, she emptied the bag.”

Buddy leaps to his feet and dives head-first into the bag. “Mmmmmm, thxxx,” is his muffled thanks.

Cameron looks sadly at Buddy’s backside sticking out of the bag he is licking clean. “It’s a shame Buddy’s been farmed.”

“Well, remember when Buddy got stuck in the twenty-pound dog food bag because he had a swelled head over his fan mail?”

Crystal thinks hard, then remembers the occasion. “Right, and you said the next time he gets stuck in a bag, we should all get together and jump on him to teach him a lesson.”

“Yeah,” Cameron sighs. “But I just can’t do that today, not to a guy who’s just lost his brains.”