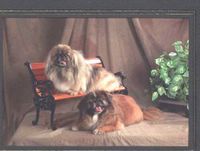 The Boys, Tinker and Poo

Buddy races into the room, yelling, “It it’s edible, it’s mine!”

Merci walks carefully into the room behind Buddy, who has nearly knocked her down in his haste to reach Percy.

Percy is so excited he can barely sit still in Jan’s chair at the computer. “Look at this.”

Merci stands with her paws on the desk to see the web page displayed on the monitor screen. Buddy rests his head on the desk and reads the encouraging messages on http://heartswithsoul.com/book_boyswrite.htm for The Boys Write by Bill Walker. “The boys write what? And who cares?”

“We care!” Percy exclaims. “Especially you, Buddy. You have been driving us all crazy trying to come up with a scheme to make money so Jan can afford to keep you. This is it!”

“The boys,” Percy says slowly and deliberately, “are named Tinker and Poo. They’re dogs. You know, dogs, like you and Merci. Dogs that wrote a book that is being published.” Buddy’s face is still blank. “For money,” Percy adds.

“Oh,” Buddy begins to see Percy’s point, “you mean they write, just like the Funny Farm Writing Club members do, only they’re going to make money on their stories. Let’s see, if their stories sell for $100 each, they’ll make - How many stories are in the book, Percy? Never mind, it doesn’t matter. If I could sell just one story at that price, that should feed me at least one day. Jan will have to keep me if I can pay my own way.”

“I don’t think that’s how it works with a book,” Percy says. “I think people pay a one-time fee to read the book. The club has seven official members and one honorary member. If the seven members write one story per week, we could put out a new book each week, but at the rate you eat, you would only have grocery money for three of the seven days. You’d have to moonlight to make meals meet.”

Merci scrolls down the page. “Wait a minute. There’s no price listed for the book. Don’t get your hopes up. What if the stories are only worth a dollar each? That wouldn’t keep you in water for the day.”

Cameron leaps onto the desk and joins the discussion. “I heard the club mentioned. Are we going to write another story for Jan? If so, as the club Treasurer, I must warn you that you’ll have to pay your dues first. You’re all in arrears.”

“Forget the dues. We’re going to help Buddy,” Merci tells him. “That is, if all the members agree.”

Percy calls the other cats into the room. “Crystal. Cotton. Cyndi.”

They all groan when they learn the topic. “You mean we work and Buddy eats?” Crystal gripes.

“I’ve been reading some of their stories while you guys were talking,” Merci says, thoughtfully. “They aren’t bad. Not as good as ours, of course, but then we learned by Jan’s mistakes, so we had a prolific teacher. This Bill probably didn’t make as many mistakes for Tinker and Poo to learn from After all, Bill didn’t start writing until he was seventy years old. By that time he must have been all out of mistakes. Maybe we can do something to help these guys.”

Percy is triumphant. “I knew the club would want to help! We four-pawed writers have to stick together.”

“I found the link in the Hearts With Soul Newsletter. It’s from someone named Teri who wants folks to post a message on http://heartswithsoul.com/book_boyswrite.htm about the book. And Tinker and Poo have some sample stories posted there.”

“What do we say?” Cotton wants to know.

Cyndi suggests, “I think we should say we’re proud to share a writing heritage with these guys. Who are they again?”

“Tinker and Poo,” Percy reminds the club. “Teri wants us to write about whether we enjoyed the sample stories and whether we would buy the book. I think we should offer to buy seven books, one for each of the club members, to help further the canine/feline writing cause. Jenny’s blind, so it wouldn’t do any good to buy her a copy, but we can read the stories to her.”

“But we don’t have any money,” Buddy protests.

Cameron begins to laugh so hard he rolls off the desk. “I knew it! I knew the day would come when you guys would regret not paying your club dues.”

Crystal sighs. “I hate to admit it but Cameron is right. We should have paid our dues.”

“How are we going to buy seven books without a treasury?” Cyndi wants to know.

“Jan doesn’t have a credit card,” Merci reminds him sadly.

Percy sags in Jan’s chair momentarily before coming up with a solution. “I know. The Funny Farm Writing Club will apply for its own credit card. And when we get it, we can buy Jan a copy of the book too.”

“All in favor?” Cotton asks.

Crystal nudges her hard. “I’m the President of the club. I’ll take the vote, thank you.” He looks around at the club members. “All in favor?”

“Aye,” the club responds in unison.

“Motion carried,” Crystal says happily. “So where do we get a credit card application?”

Percy whips a stack of papers out from under the keyboard. “I’m glad you asked. I just happen to have one handy.”

Note to self, Percy: Email Bill our thanks for sending the photo Cherlyn used to design the book cover for The Boys Write. Her site has music and so many graphics that I typed the entire meeting minutes while waiting for her home page (link is no longer good) to load. Now, that’s cooperation!