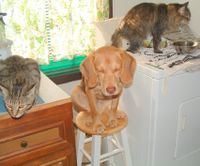 Percy types away, oblivious to everything around him, until the keyboard locks. He glances at the screen but all he can see is Cameron’s back. He reaches over and swats Cameron between the shoulder blades.

“Get out of the way. You’re sitting on the keyboard.”

“I’m sorry,” Cameron apologizes, “but I moved closer to the monitor so I could read the screen better.”

Cotton leaps onto the desk and glances at the screen. “What’s a Floppy-Eared Honda?”

“You must need glasses. That reads, ‘Floppy-Eared Hound Cat.’”

Percy squints at the screen. “Yes, it does.” His nimble claws quickly make the correction.

“So what is a Floppy-Eared Honda?” Crystal demands, landing lightly on the far edge of the desk.

“Do you guys know what a Scottish Fold is?”

“No,” Crystal and Cameron chorus.

“Isn’t that some kind of foreign currency?” Cyndi asks.

“It’s a breed of cat with folded ears,” Cotton says. Crystal, Cyndi and Cameron laugh at her. “Well, it is. You guys don’t have to look at me like I’m making it up. There’s a cat book on the bottom shelf of the bookcase. Look it up for yourselves.”

“You’re right,” Percy assures Cotton. “Their ears fold forward and downward. I was looking through Jan’s cat book and found some pictures of them. They gave me an idea.”

Crystal closes his eyes and sighs, “Oh, no. Percy has another idea.”

“I’m writing a press release for a new breed of cat I’ve discovered.”

“The Floppy-Eared Hound Cat?” Percy responds to Crystal’s question with a nod.

Merci wanders into the room and joins the conversation. “What is a Floppy-Eared Hound Cat?”

“But Buddy’s a dog,” Cotton reminds him.

“Yes, Buddy was born a dog,” Percy agrees, “but he was only three or four weeks old when he moved in here with all of us, and he learned to be a cat by imitating what we do.”

“That’s ridiculous!” Merci sputters. “Buddy’s a dog, just like me.”

“No, he isn’t. Buddy is just an oversized cat. Remember, one of the first lessons he learned was how to climb onto the back of the swivel rocker to curl up and sleep? We cats all do that.”

“Yeah,” Crystal admits reluctantly, “but we sleep on the back of the chair while it’s upright. Buddy’s weight tips the chair over onto its back on the floor.”

“So? He still climbs onto the back of the chair to sleep. We don’t need to stress that the chair is on its back on the floor at the time. Besides, remember how he climbed onto the washing machine a couple of months ago when Jan was moving cabinets in the kitchen? She did a double take when she turned around and there was a Floppy-Eared Hound Cat sitting among us.”

“She sure did. I forgot about that.” Crystal laughs. “Jan didn’t realize Buddy would figure out how to climb the chair ladder she made for Jenny.”

“But Buddy can figure out how to do anything to reach food,” Percy says. “Look at how he figured out how to squeeze past the bar stool between the counter and dryer, stand on the round scratching post, turn around, and climb onto the stool to help himself to huge bowls of extra food. And he got away with it!”

“Yes, until Jan caught him sitting on the bar stool with his feet on the counter, licking the last of the dry food that was supposed to feed six cats,” Cyndi adds.

“But,” Percy continues, “when she moved the bowl onto the washer and put things on the counter to stop Buddy, he just repeated the same route, climbed over the obstacles and ate another huge bowl of food. That was his second, or maybe it was his third bowl, in just one day. He’s a master sneak. He has to be a cat!”

“Oh, I see where you’re going with this,” Cameron says. “He’s one of us because he can find a way onto the counters no matter what Jan does to block him. Yes, he would have to be at least part cat to spend so much time where he isn’t supposed to be in the first place.”

Cotton gloats. “But Jan did finally find a way to keep Buddy out of our dry food. It took some doing, though. I thought I would fall off the washer from laughing when Buddy tried to crawl under the wooden chair and almost got stuck.”

“Actually, he was stuck.” Cyndi grins at the memory. “He would probably still be there, but Jan scared him loose when she walked in the kitchen.”

Percy looks around the group. “Now she has a three step fold-up stool blocking Buddy’s path. I wonder how long it will take Buddy to figure out how to move it out of the way so he can pig out again?”

Cotton changes the subject slightly. “Why are you interested in discovering a new breed of cat, anyway? You must have an angle or you wouldn’t have spent the day at the computer.”

“Because,” Percy tells them, “if I can get Buddy listed as a new breed of cat with the CFA, I can enter him in shows. Buddy won’t have any competition, he’ll win all the best of his breed at the shows, and I’ll be rich.”

Percy turns in surprise. “Oh, Buddy. I thought you were napping. Yes, of course, I mean we’ll both be rich.”

Buddy sits down beside Percy’s secretary’s chair. “What do we have to do?”

“I’ll tell you all about it in a minute, Buddy. But first, I need you to purr for me?”

“That’s the sound we cats make when we are contented.”

Percy is delighted. “Good. Then purr for me so I can add it to your list of cat qualities.”

Merci stands and walks away. “That sounds like a dog to me. I rest my case.”