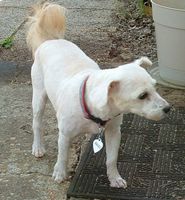 
"Why are you two looking so sad?" Percy asks, when he finds Merci and Buddy sitting at the computer, Merci on Jan’s chair and Buddy sitting on the floor with his chin on the edge of the desk. Both are staring at a picture on the monitor.

“We’re looking at a picture of Benji,” Buddy responds. “Jan took this last year after he was shaved. He looks so funny without his fuzzy hair.”

Percy laughs. “I remember that. He was so embarrassed when Jan brought him by after she picked him up from the vet’s office. Is she going to have him shaved again this year?”

"He died early this morning."

Percy frowns. "Benji wouldn't do that! When Jan brought him over to visit us, he said he couldn't wait for her to take him back to Miss Mother's where he belonged. He didn't mind a short visit, but Miss Mother was his responsibility and he couldn't be away long. Not since his friend Shorty died, anyway."

"But," Buddy says, with great sadness, "the last few times we visited him and Miss Mother, he said he was tired and would be going away soon. I thought he meant he was going on vacation to get some rest. I still can't believe he meant he was leaving us forever."

"Neither can I," Merci adds. "We saw him just a day or two ago and he reminded us he would be leaving soon and asked us to promise to take good care of Miss Mother for him. He said he knew Miss Mother needed him but he was just too tired to hang on any longer. We didn’t have any idea what he meant and we certainly didn’t understand he would not be coming back, but we said we would watch out for Miss Mother so he could rest in peace.”

"It was so sad. Jan wrapped him in something he liked of Miss Mother's, put him in a box, and took him to Mr. Doug's house. Mr. Doug buried Benji in his back yard next to his old friend Shorty who died last year." Buddy sniffs, not wanting to cry and spoil his image. He is seven months old now and too old to cry.

Percy pretends he doesn't notice Buddy's pain. "But he never came over to say good-bye to the rest of the Funny Farm group."

A tear spills down Merci's face. "He said good-bye to all of us on Wednesday. We just didn't mention it because it didn't seem important at the time. He remembered you, all of you. Especially Crystal, since Crystal whacked him one on the nose on his first visit. You know Crystal, he doesn't consider himself a cat toy."

"I'm going to miss stealing his food when we walk through Miss Mother's house. He always left something in his bowl for me to eat."

"Buddy, do you ever think of anything except food?" Merci asks, with a touch of impatience. "This is serious. Benji went away and left Miss Mother all alone."

Buddy tilts his head and says, earnestly, "But Miss Mother is not all alone. She has Jan and Mr. Doug. And us! We will just have to visit more often and sit in her lap to cheer her up."

"If you sit in her lap," Merci says, "you'll squash her! She's just an itty-bitty woman compared to you. Act like a gentleman instead. Sit on the floor, offer her your paw and lick her hand."

"I licked her face today," Buddy says, softly. "It was salty. She'd been crying."

"Guys, you're going to have me bawling in a minute," Percy complains. "I'm going to be a year old next month. I'm too old to cry. We need to think of something else." Percy perks up. "Oh, didn't you mention Jan wrapped Benji in something he liked of Miss Mother's?"

"Yes," Merci says. "She wrapped him in a dress of Miss Mother's."

Percy objects to this. "Well, people have strange customs. Wrapping a male dog in a dress! Buddy, would you want Jan to wrap you in a dress when you die?."

"Well, not really, but this was something of Miss Mother's he really liked. He used to steal it and sleep on it when it was cold. It probably had her scent on it when he used it for a bed."

"Well," Percy continues, "Jan should have given him something of her own as a going away gift."

"Well, I'm not sure. He was only here two or three times and he wasn't attached to anything of hers. But she could have given him her writing hat. Jan likes the hat, even though we hated it when she made us wear it to write our first few journal entries. It would have been a nice gesture on her part and it would have completed his burial outfit."

"Yes, that would have been nice," Merci says with a sigh. "I hate to think of him lying in the ground without a hat."

"I hate to think of him lying in the ground at all," Buddy adds. "Miss Mother is really going to miss him. And so am I." Despite his efforts to hold them back, two big tears roll down his face and drip onto the floor.

"I’m going to miss him too," says Merci.

“You can’t,” Buddy asserts. “You’ll have us all bawling.”