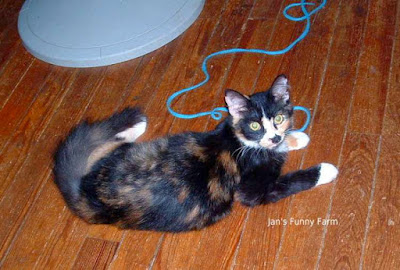 Cyndi:  This has been one of those weeks!  Everything (just about) has been going wonky and Jan has wasted much of her time trying to figure out what each problem is.  And Jan caused a major blooper, but we can't tell you about that until next Tuesday's post.

Taylor:  Well, she did finally figure out how to make us a Christmas card yesterday without the needed software.  It's about time!  Christmas is almost here.

Cyndi:  She tried to find something online to use but her brain is old and it addles easily.  The card isn't printing quality, though, so she can only email or post it.

Taylor:  You mean our friends who don't have a computer won't be able to see our adorable faces on our Christmas card this year?

Cyndi:  No, they won't.  Jan considered re-using last year's but it's too sad  since it has angels Merci and Rusty on it.

Taylor:  I guess that means we five have to survive until next Christmas so we can all be on that card.

Cyndi:  Yes, it does.  Percy and I are the oldest.  Cross your paws for the next months that we will still be here.

Taylor:  But how will I walk if I cross my paws? 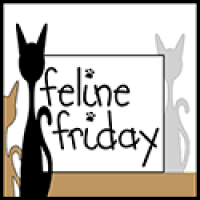