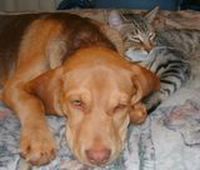 Cotton opens one eye and stops in mid-stretch, blinking rapidly. Cyndi screams and leaps to the back of the swivel rocker at the same moment Crystal does and the chair tips over onto its back. Cameron leaps onto the coffee table and Merci scrambles underneath the couch.

Ever so slowly a white apparition with black and gray tabby ears shuffles from the bedroom into the living room, dragging its right hind leg and leaning heavily on a makeshift crutch. Beside this strange creature walks Buddy.

Merci is the first to recover. “Percy, what are you supposed to be?” she laughs, as she crawls out from beneath the couch.

Percy leans hard to his left, his weight held up by his temporary crutch, and slowly drags his thick, white-swathed foot another fraction of an inch forward. “I’m an invalid. Jan made an invalid out of me.”

“You’re not an invalid,” Crystal says. “And you better put her hairbrush back where you found it or you will be one.”

“Now, you leave Percy alone,” Buddy says, in Percy’s defense. “I have examined him and doctored his wound. He really is an invalid.”

Cotton is skeptical. “What wound?”

“In case you didn’t notice, Jan closed the back door on my foot and I gushed blood all over the house.”

“The way you screamed the whole county probably noticed, but that was yesterday,” Cotton reminds him, “and that was an accident. What were you doing on top of the door, anyway? I wouldn’t have thought to look up there for you either.”

“And you didn’t gush blood,” Cyndi adds. “You lost a few drops of blood in the kitchen, and right after Jan checked to see if you were okay, you were swinging from the ceiling again.”

“See, that’s why I appreciate Buddy. He isn’t giving me a hard time. He’s the only one who is willing to help me before my foot turns green and falls off from loss of blood.”

“You cleaned his wound? Oh, gross!”

“Don’t you call Buddy gross, Cotton. He just doctored me.”

“He also just sneaked a snack out of our litter pans.”

“I’ll pretend I didn’t hear your sarcasm,” Buddy says. “I didn’t lick his wound, I washed it with soap and water. Then I bandaged it.”

“But why?” Crystal wants to know.

“Well, that’s what you do with an injury. When Jan fell while Merci and I walked her, she bandaged her elbow until the bleeding stopped and then Mr. Doug brought her some colorful Garfield knee Band-Aids.”

“But she only used a strip of gauze for her elbow and another for her knee. You look like a mummy with ears. Even your tail has disappeared under all that white fluff. How big a bandage did Buddy use?” Cameron asks.

“The biggest bandage I could find,” Buddy says, proudly. “I thought he should go for the sympathy wrap. And I only stuck him three times when I fastened it with a safety pin.”

“Yes,” Percy sighs, “Jan won’t be able to mistake my misery. She’ll feel guilty and I’ll get lots of attention and extra treats. And she’ll never close a door again without checking to see if I’m on top of it.”

Merci and the other cats erupt into laughter, as Percy continues his slow shuffle across the floor. “Good luck,” Crystal chuckles. “Buddy is going to have to unwrap you and then re-wrap you.”

“Maybe this time he’ll only stick you twice with the safety pin,” Cyndi teases.

Percy stops shuffling and looks at Buddy. “You didn’t? You couldn’t be that dumb.”

Buddy looks crestfallen. “Uh, I guess I might be. I wasn’t thinking. There was just so much bandage and so little of you to wrap in it. I wrapped you from neck to tail” He brightened. “At least I didn’t wrap your face. I did remember you need to breathe.”

“Don’t worry, Buddy,” Cotton says. “Your mistake isn’t half as bad as Percy’s.”

“What are you talking about?” Percy asks, puzzled. “I didn’t make a mistake.”

Cotton grins. “Yes, actually you made a big mistake. You had Buddy wrap your right foot, but Jan closed the door on your left foot yesterday.”

Percy looks Buddy in the eye and forces a smile. “Oops.”