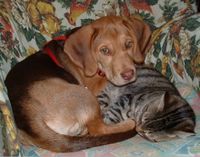 “Buddy, you have the hiccups.” Percy is concerned when he finds Buddy sitting in the living room in the middle of the night, his sides heaving with great hiccups. “Do you want me to scare them out of you?”

Buddy is miserable. “No, I don’t have the hiccups. I’m sick to my stomach but nothing will come up. This must be what it feels like to die.”

“You probably have a virus. You’ll feel better in the morning.”

“No, I would feel better than this if I had something as common as a virus. I think I have food poisoning. I just know I’m going to die from it. I’m only five months old. That’s too young to go.”

“Food poisoning? Hmm.” Percy is thoughtful. “You don’t get food poisoning unless you eat something tainted. What have you eaten today?”

Buddy furrows his brow as he tries to remember what he has eaten. “I didn’t have much to eat today, mostly nibbles here and there.”

“But exactly what did you have?” Percy persists.

“Well, Merci and I took Jan out on her leashes first thing this morning, just as soon as she rolled out of bed.”

“And when you returned we all had breakfast.”

“No, first I had some hors d’oeuvres from the tree out front. They are small but good on an empty stomach.”

“Yes. Then I had some pecans I found near the mill,” Buddy says. “I guess the squirrels have enough to eat since they buried those in the dirt for me.”

“And then you had breakfast?”

“Yes, I had a cup of dry puppy food with a spoonful of canned dog food and a big gulp from Merci’s bowl before Jan pulled me away from it.”

Percy is aware of Buddy’s voracious appetite. “What else did you have today? I know you ate more than that. I saw Jan serve you a cup of dry food this afternoon and one late in the evening so you would sleep through the night instead of searching for food.”

“Yes, I had a mid-morning snack,” Buddy admits. “When Jan wasn’t around, I ate some of the treats you guys hide in your litter pans for me. And after lunch Jan took me over to Miss Mother’s to play. She took Merci too. I ate some more pecans there. Oh, and part of a stick. And some grass. I almost forgot the grass.” He looked a bit sheepish and admitted, “I also ate a slice of bread and cheese. You should have seen Jan’s face when she turned around for a moment and I swiped half of the sandwich off the table that she was fixing for her lunch. She forgets I’ve grown taller and can reach higher now.”

“Well, that sounds like a fairly normal day for you,” Percy tells Buddy. “There isn’t anything you ate that could give you food poisoning. Are you sure you didn’t forget to mention something?”

“No, that was everything.”

“Well, you aren’t going to suddenly die from eating the same things you eat every day,” Percy says. “You must have left out something!”

“No!” Buddy is adamant. “I told you everything I ate today. I’m going to die and they’ll have to do an autopsy on my body to find out what poisoned me. Make sure they put me back together before Jan buries me, please, Percy,” Buddy begs.

“I will,” Percy promises him.

Buddy’s heaves turn stronger and at last he vomits up the offending food. Buddy and Percy both stare in surprise at the mess on the floor.

“I knew it!” Percy exclaims. “I knew you didn’t tell me everything you ate.”

“Oh, yeah,” Buddy admits, “I forgot the corn cobs. Jan gave me one. I bit it in half and swallowed both pieces whole. Then I stole Merci’s out of her mouth and ate hers the same way. She was going to take it away and nibble on it daintily, like a lady. That’s no way to eat. Food was meant to be swallowed whole. Boy, those corn cobs were good!”

Percy shakes his head, unable to comprehend Buddy not eating his food slowly and savoring every bite. “Well, at least you aren’t dying. You’ll live to pig out another day.”

“You know,” Buddy says happily, “these corn cobs were so good the first time. They should taste even better the second time around.”

“Buddy, I love you like a brother, but you have the manners of a dog,.” Percy throws over his shoulder as he walks away in disgust.

“But, Percy, I am a dog.” Buddy calls after him as he licks his lips. “And now that I’m not going to die, I think I’ll go back to bed and get some sleep. It’s almost time to get up and walk Jan by the hors d’oeuvres tree again.”