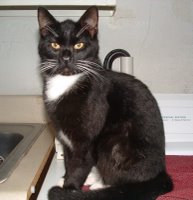 Percy stands taller than usual on Jan’s chair, with laughing eyes and a purr rumbling from deep in his chest.

“You look so proud you could burst,” Merci says, as she sits down beside the computer chair.

“I am,” Percy responds. “We should all be proud of what we did.”

Buddy drops onto his haunches on the other side of the chair. “Okay. I’ll be proud. But what did we do?”

“Yes, what did we do?” the cats chorus, leaping onto the desk and making themselves comfortable.

“We posted the All C.A.T.S. ( http://www.allcatsinc.org/ ) Hurricane Katrina animal rescue updates in our journal. Pat read our posts and sent us a personal message. She appreciates the voluntary contribution of our time and talents, even though we couldn’t find Jan’s credit card to make a monetary donation to the rescue effort.”

“Yes, that’s too bad,” Cameron says, with a touch of haughtiness, “but if you guys had been paying your club dues, we could have made a donation from our own funds. I told you the time would come you would regret having an empty treasury.”

Cotton sighs. “Cameron is right. We should have listened to our Treasurer and paid our dues. The problem is, Jan doesn’t give us an allowance. We tried donating dry food morsels to the treasury but Buddy swallowed them whole before Cameron could even count them.”

Buddy’s tongue snakes across his lips at the memory of the unexpected early morning snack. “Yes. I make a motion we do that more often.” He glances around at the other club members and innocently inquires, “Does anyone want to second the motion?”

The response is instantaneous and unanimous. “No!”

Cyndi steers the conversation back to the original subject. “Well, I think it was nice of Pat to send a personal note to the club.”

Percy turns his attention back to the e-mail message on the computer screen. “There is more to the message. She says - Never mind, I’ll just read it to you.”

The money ran out and the Crew wore out. They would have kept on if enough money had come in, but I think "donor fatigue" has set in for a lot of people.

Percy is perplexed. “I don’t know. It’s probably some disease they picked up from riding through the flooded streets in a motorboat.”

We are very proud of the Crew. They rescued a total of more than 3,000 animals, and all but 125 of those rescued have been reunited with their owners.

Cyndi sighs. “Wow! Can you imagine all those ecstatic reunions?”

“Since Cameron was not born with 600 front feet, this conversation is moot. Can I finish reading the message now?”

“I’m sorry, Percy. You don’t have to get upset with me. I only asked a question,” Cameron says politely. ”Go ahead and finish reading the message.”

Percy continues: The shelter in Alabama did end up with about 25 extra rescue animals, which we really can't afford, but what can you do when they need you? If you know of anyone who would like to help support these animals, we could sure use the help.

Percy looks around at the group. “Do we know anyone who would like to help these animals?”

“Do you mean, besides us?” Crystal asks. “I would sure like to help them.”

“I would too,” Merci adds. “I wonder if there is something we can do.”

Cameron asks, with a touch of sarcasm, “Isn’t this ironic? Dare I suggest we begin to collect club dues so we can make a contribution?”

“Yes, you can suggest it, but we’re broke, remember?” Merci reminds him.

“But we all eat, don’t we? Why not give up one morsel of dry food each time we eat?”

Cotton feels a stir of excitement. “That’s not a bad idea, Cameron. We cats nibble several times a day. Merci eats twice a day and you, Buddy, well, we’ll only count the two times a day Jan feeds you. We won’t count what you steal or what you swallow that isn’t actually considered edible.”

“Yes,” Cyndi adds, “and we can borrow one of Jan’s plastic containers to store the food until we have enough to ship to All C.A.T.S. in Alabama to help feed the extra animals.”

All heads turn toward Buddy.

“Oh, no, you don’t!” Cameron tells him sternly. “We’re taking up a food collection for the All C.A.T.S. animals, not for you. I’m the Treasurer and I’ll guard the food container – from you!”